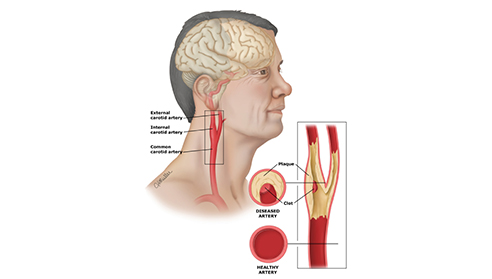 Ischemic cerebrovascular diseases include transient ischemic attack and ischemic stroke. They are often caused by ischemic necrosis or localized softening of localized brain tissues due to obstructed blood supply, ischemia or hypoxia in the brain. There are many causes of ischemia and hypoxia, for example, fatty deposits called “plaques” accumulate in arteries, which makes the arteries narrowed, or emboli produced by a variety of diseases enter the blood and circulate to cerebral arteries to cause occlusion of vessels. Common ischemic cerebrovascular diseases include intracranial arterial stenosis and acute ischemic stroke.
Etiology
Diagnosis
How to determine if someone has a stroke - FAST

Face - Whether the face is asymmetrical or drooping on one side

Arm - Whether there is weakness or numbness in one arm or both arms, and whether one of the arms droops down when trying to raise both arms

Speech - Whether there is language difficulty, and whether the voice sounds strange when speaking

Time - If any of the above is noted, call 120 immediately. The earlier the initiation of treatment, the better the chance for recovery.

Who is at risk of developing ischemic cerebrovascular disease

(4) Smoking: Smoking (or exposure to smoke) can increase the expression of various adhesion molecules in the blood and cause platelet dysfunction, which in turn destroys vascular endothelial cells, induces smooth muscle cell proliferation, causes vasomotor dysfunction, and promotes the formation of atherosclerosis.

(5) Genetic factors: One or more family members suffering from cerebrovascular disease suggests that the patient has a higher risk of cerebral atherosclerosis.

(6) Age: The development of cerebral atherosclerosis shows a significant upward trend at > 45 years of age.

(8) Obesity, obesity induced by poor dietary habits (people with a high BMI) and poor dietary habits (such as intake of high-calorie, high-fat foods including meat or fried food) are often accompanied by lipid metabolism disorders, thereby promoting the formation of atherosclerosis.

Intracranial Stenting with Balloon-Expandable Stents is designed specifically for symptomatic intracranial atherosclerosis. The Apollo stent system comprises of a semi-compliant balloon, a stent, and a delivery catheter. After advancing the stent system to the lesion over a guide wire, the balloon is gradually inflated to relieve the stenosis. Artery recanalization is achieved and the stent is deployed to improve long-term cerebral blood perfusion.